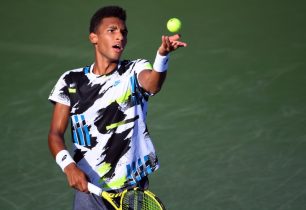 NEW YORK (Reuters) – Canada’s Felix Auger-Aliassime is happy to see players from different ethnicities and backgrounds reach the latter stages of big tournaments but says officials can do even more to encourage diversity in professional tennis.

Auger-Aliassime, whose father was from Togo in West Africa, advanced to a Grand Slam fourth round for the first time on Saturday with a 6-1 6-0 6-4 victory over France’s Corentin Moutet at the U.S. Open.

While the victory achieved a personal milestone, Auger-Aliassime said he also felt a responsibility to be a role model for the small but growing numbers of players of colour in the game.

“I was thinking today that you want to send out a good message. You hope that you’re leading by example, that kids, in you, they see belief, that you can reach that whatever city, country, neighbourhood you come from.”

Auger-Aliassime said he was lucky to grow up in a “melting pot” of cultures in Quebec and one of the benefits of the global tennis tours was that they could reach into every continent.

Players were generally welcomed everywhere they travelled, he said.

“I just love to see people from everywhere,” he said. “It’s just a great message to send, to be open to diversity.”

American Frances Tiafoe, who advanced to the fourth round with a 6-2 6-3 6-2 victory over Marton Fucsovics, echoed Auger-Aliassime’s sentiments and said he wanted to serve as a mentor for the younger Black players coming through the ranks.

“I’m not going to let these guys fail,” said Tiafoe, who was born to immigrant parents from Sierra Leone. “Whether it’s tennis or whatever, I just want to see people of colour in my communities win.”

(Reporting by Greg Stutchbury in Wellington; Editing by Peter Rutherford)