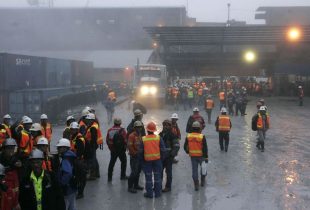 By Fathin Ungku and Ernest Scheyder

SINGAPORE/HOUSTON (Reuters) – When miners at Indonesia’s giant Grasberg gold and copper mine started testing positive for coronavirus early in the pandemic, the mountain-top mining complex was quickly locked down with a skeletal staff left in place to maintain production.

But as months of travel curbs dragged on, angry workers blockaded the mine for four days in August until the operator – a unit of U.S. miner Freeport McMoRan Inc – relented and let them resume weekly rotations out of the site via a four-hour trek by cable car and bus to towns below.

Now the workers are happier, but health experts fear the greater risk of a new outbreak.

The tensions expose the balancing act to maintain output at full blast, while containing COVID-19 in mines like Grasberg, the world’s largest gold mine and second-largest copper mine.

“We’ve put the priority and the health of our workers and community at the top of our list,” Freeport McMoRan Chief Executive Richard Adkerson told Reuters. “From the outset, we recognized that (Grasberg) was a particularly vulnerable place due to the size of the workforce” of nearly 30,000 people.

While Freeport has halted some global operations due to the pandemic, production has continued at the 14,000 foot (4,267 metre) -high Grasberg mine despite Indonesia facing one of the worst coronavirus outbreaks in Southeast Asia.

In May, Freeport said it would operate with a “skeletal team” because of a rise in coronavirus cases in the area, including at the workers’ living quarters. Freeport said at the time it was limiting contractors and removing “high-risk” workers but did not specify how many people would be working at the mine.

But the lockdown took a psychological toll on the workers stuck above the clouds at the site since April, some of whom said that they were unable to attend funerals of family members.

“We were frustrated, we wanted to see our families. So we had to protest,” said a worker, speaking from a dormitory shared with four others. He asked not to be named due to fears of losing his job.

Workers who were kept from working the mine were also unhappy because of lost wages.

Grasberg is located in Papua province’s Mimika regency, which has seen a steady rise in coronavirus cases. As of Oct. 8, there had been 1,902 cases in a population of about 224,000, the second-most infected area in Indonesia’s easternmost province.

Five people have died of COVID-19 at the mine with 724 confirmed cases as of Sept. 29, according to Mining Industry Indonesia, the state company holding a majority stake in Freeport Indonesia.

Since the protests, workers have returned to a weekly crew-change roster, the local company PT Freeport Indonesia said, with about 400-500 workers leaving and entering the mine daily after temperatures checks and a rapid COVID-19 test.

If a rapid test is positive, this would be followed up by a Polymerase Chain Reaction (PCR) test, which experts consider far more accurate.

Before the pandemic, twice as many workers would enter and leave the mine daily, Freeport Indonesia said.

Adkerson said Freeport is treating its employees for coronavirus free of charge at its own medical facilities.

Tri Yunis Miko Wahyono, an epidemiologist at the University of Indonesia, said crew changes should be less frequent to limit the risk of spreading the virus.

“The shortest crew change should be two weeks unless a company is willing to pay for PCR tests for every worker every week,” he said.

But that strategy keeps workers on site longer, adding to potential friction with the company.

“EVERYONE WANTS US TO KEEP WORKING”

To help resolve the protests, Freeport Indonesia paid workers compensation of up to 15 million rupiah ($1,010) for working longer than usual, although it said it did not have responsibility for contractors, who make up nearly three quarters of the 29,201 workers.

A Freeport contractor said by telephone he had not received any payment yet, but the issue was being discussed with management and there were no plans for more protests.

Freeport is one of Indonesia’s biggest taxpayers, with direct contributions of more than $16 billion in taxes, royalties, dividends and other payments between 1992 and 2015, according to company data.

The mine is also crucial for Freeport McMoRan, the world’s largest publicly traded copper producer, which made a profit in the second quarter partly due to higher production at Grasberg.Operations at the Indonesian mine are expected to ramp up even further as it transitions from open pit to underground mining.

“Everyone wants us to keep working. The government does, the community does, it’s important for all stakeholders. Even, in the U.S., mining is considered essential,” said Adkerson.

(Additional reporting by Bernadette Christina Munthe in Jakarta and Melanie Burton in Melbourne; Editing by Ed Davies and Raju Gopalakrishnan)