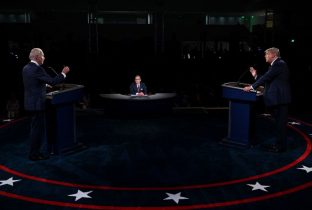 After the first Trump-Biden debate in September devolved into a chaotic shouting match, moderators said they would mute each candidate’s microphone to allow the other to speak without interruption for two minutes at the outset of each 15-minute debate segment.

The mute button is not being used, however, for the remaining 11 minutes of each segment, so there is still plenty of opportunity for the candidates to mix it up.

Whether thanks to the mute button or not, the debate got off to a relatively civil start as the two candidates made their opening statements and allowed each other to answer questions from moderator Kristen Welker without interruption.

Trump, in particular, seemed to be on his best behavior. Viewers largely panned his performance in the first debate, in which he repeatedly interrupted Biden.

Shortly after the last debate, Trump contracted COVID-19 and spent three days in a hospital. The pandemic, which has killed more than 222,000 people in the United States, remains the top issue for voters and Biden has repeatedly accused Trump of mismanaging the crisis.

“I caught it, I learned a lot. Great doctors, great hospitals,” Trump said.

Trump appeared to make news by promising that a vaccine for the virus would be ready “within weeks,” before backpedaling. “It’s not a guarantee,” he clarified. He promised that the country was “rounding the corner,” even as several U.S. states reported record one-day increases.

Biden waved his black face mask as a prop, an implicit rebuke of a president who has famously been reluctant to wear one. “If we just wore masks, we could save 100,000 lives,” he said.

Organizers had planned to install a plexiglass barrier between the two candidates to reduce the risk of infection, but they took it down after Trump tested negative for the virus.

Members of the Trump family did not wear masks at the last debate. For this one, they arrived with masks on.

An investigation by the Republican-led Senate Intelligence Committee turned up no evidence to support that allegation.

In fact, the only result has been Trump’s impeachment last year by the House of Representatives for pressuring Ukrainian President Volodymyr Zelenskiy to investigate Biden.

Biden flatly denied any impropriety on his part, and contrasted his willingness to release his tax returns with Trump’s refusal to do so. “What are you hiding?” he asked. “Release your tax returns, or stop talking about corruption.”

Trump was left to air old grievances about the Internal Revenue Service, former Special Counsel Robert Mueller and others who he thought were treating him unfairly. “I get treated very badly by the IRS, very unfairly,” he said.

Biden eventually sought to turn the discussion away from their personal finances. Addressing viewers, he said: “It’s not about his family and my family. It’s about your family. And your family’s hurting badly,” he said.

Even as the two were debating, the campaigns reported fundraising figures that showed Biden sharply outraising Trump in the first two weeks of October.

The Biden campaign told the Federal Election Commission it raised $130 million in that period, while the Trump campaign took in $43.6 million.