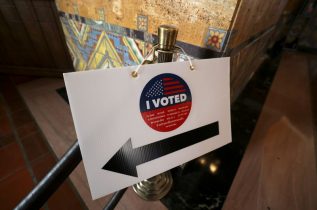 (Reuters) – U.S. Vice President Mike Pence planned to press ahead with campaigning including a Sunday trip to the battleground state of North Carolina after multiple close aides tested positive for the coronavirus, as the pandemic remained front and center in the presidential race.

With nine days to go before the Nov. 3 election in which Democrat Joe Biden is challenging Republican President Donald Trump, the White House cited Pence’s status as an “essential worker” as justification for his travel despite exposure to his chief of staff, Marc Short, who tested positive on Saturday.

Multiple other senior aides to Pence also tested positive for COVID-19, the White House chief of staff said, as new nationwide infections soared to record numbers in recent days amid a pandemic that has killed 225,000 Americans.

In addition to dominating the campaign policy debate – with Trump insisting the United States is “rounding the turn” on the crisis while Biden has blasted Trump’s disjointed response – the pandemic has changed Americans’ voting habits, with 58.7 million ballots already cast.

Devin O’Malley, a spokesman for the vice president, said on Saturday that Pence and his wife both had tested negative and that Pence would maintain his schedule “in accordance with the CDC (Centers for Disease Control and Prevention) guidelines for essential personnel.”

It was the latest reminder of the way that Trump – who was hospitalized for three nights this month after contracting COVID-19 – and those around him have downplayed the advice of public health experts to wear masks and observe social distancing guidelines to stem transmission of the virus.

In an appearance on the CNN program “State of the Union,” Meadows on Sunday cited the “essential personnel” distinction for Pence as justification for the vice president not adhering to CDC guidelines for isolation after potential exposure to an infected person.

Meadows said Pence would continue to campaign and speak at rallies.

“I spoke to the vice president last night at midnight,” Meadows told CNN. “And what I can tell you he’s doing is wearing a mask, socially distancing, and when he goes up to speak he will take the mask off and put it back on.”

Meadows declined to say whether Pence, who has headed the White House coronavirus task force, would be tested daily going forward, but did say “we do test on a regular basis.”

Trump has mocked Biden for wearing a protective mask and has addressed packed rallies in which many of his supporters are not wearing masks. Public health experts have said such events with many people in close quarters not wearing masks can facilitate the spread of the virus.

Former New Jersey Governor Chris Christie, who himself caught COVID-19 and was hospitalized for a week after spending several days at the White House without wearing a mask, on Sunday said he was “surprised” Pence would continue campaigning.

“Everybody’s gotta put the health of the people they’re going to be in touch with first,” he told ABC’s “This Week” program.

‘BUILD THIS COUNTRY UP’

Trump is due to campaign in the small New England state of New Hampshire on Sunday.

An influential newspaper in New Hampshire with a record of endorsing Republican presidential candidates endorsed Biden on Sunday.

“America faces many challenges and needs a president to build this country up. This appears to be outside of Mr. Trump’s skill set,” the New Hampshire Union Leader said in an editorial.

Trump is running out of time and opportunities to change minds and shift the race in his favor.

After voting early in his home state of Florida on Saturday, Trump raced through rallies in three states – North Carolina, Ohio and Wisconsin.

Biden, who made two campaign stops in Pennsylvania on Saturday, has no campaign events scheduled for Sunday.

During his swing through Pennsylvania, Biden renewed his criticism of Trump for not taking the health crisis seriously enough and warned of a resurgence during the winter months of the virus, which is on the rise in numerous states.

“It’s going to be a dark winter ahead unless we change our ways,” Biden said of Trump’s attempts to contain the coronavirus.

The United States set a single-day record of more than 84,000 new COVID-19 cases on Friday, according to a Reuters tally, with the spike in infections hitting election swing states Ohio, Michigan, North Carolina, Pennsylvania and Wisconsin.

Lakers dominate Heat for lopsided win in Game 1 of NBA...